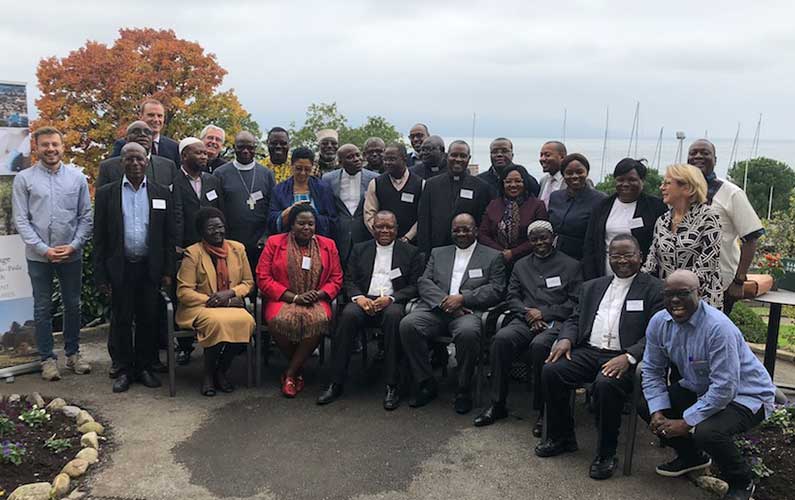 At the initiative of the Congolese National Episcopal Conference CENCO, Catholic, Protestant and Muslim faith leaders from seven African countries on 1st November 2019 established the “Interfaith Platform Dignity and Peace – Great Lakes IPDP-GL”. This platform is intended to serve as an instrument for faith communities in the African Great Lakes region to prevent conflicts, conduct preventive diplomacy, undertake mediation, and conflict transformation, as well as build capacity in the African Great Lakes region. CENCO has been supported in the conception and execution of this project by CatImpact, while the first phase of the initiative, leading to the creation of the IPDP-GL was financed by the Government of Switzerland.

The preparatory phase of this ambitious initiative, led by CatImpact and supported by CENCO, was entirely financed by the Government of Switzerland. This phase, which lasted from February until November 2019, included workshops to map the socio-political engagement of faith communities in all concerned countries. It concluded with a workshop (October/November 2019) joining the faith leaders from seven countries during which the Platform was launched.

On the initiative of the Conférence épiscopale nationale du Congo CENCO  (the National Episcopal Conference of Congo), with support (through CatImpact Sàrl) and financing by the Government of Switzerland, a regional Platform, the Interfaith Platform Dignity and Peace – Great Lakes (IPDP-GL) for the prevention and resolution of conflicts in the African Great Lakes Region was created on 1 November 2019.

The key objective of the IPDP-GL is to create a dynamic instrument for faith leaders which they can utilize to support their mediation, dialogue and other conflict resolution or prevention efforts within their own countries (such as the mediation that was led in the DR Congo by CENCO in late 2016, the ongoing efforts by faith leaders in Central Africa and South Sudan as well as in numerous other countries), or regionally.

The preparatory phase of this ambitious initiative was entirely financed by the Government of Switzerland. This phase, which lasted from February until November 2019, included workshops to map the socio-political engagement of faith communities in all concerned countries. It concluded with a workshop (October/November 2019) joining the faith leaders from seven countries during which the Platform was launched.

The countries of the African Great Lakes region, instead of seeing an improvement of their profound political and security crises, suffer from an increasing and worrisome shrinking of democratic space, as well as a generalized loss of legitimacy of the political class. Corruption is endemic, poverty extreme, and youth is without work and without perspectives.

Community violence, as well as violence perpetrated by armed groups (and at times national armies), contribute to increasing tensions between countries in the region, often supported or justified by members of the political class. If these countries have different historical narratives, they share many commonalities, particularly when it comes to the despair of the populations regarding their political class.

In most countries in the Great Lakes region the population’s perception of democracy has been tarnished, and people’s trust in their political leaders, state institutions and international organizations has been shattered.

The only institutions that continue to enjoy the population’s trust and can speak with moral authority are the faith communities. As in numerous other African countries, in the DRC faith communities have played a key role in the past: during the inter-Congolese dialogue in Sun City (2002/2003) they were involved in mediation and the preparation of participants for the dialogue. More recently, CENCO was responsible for the mediation that led to the 2016 New Year’s Eve agreement.

With this recent positive experience in the DRC in mind, CENCO launched an initiative for a regional platform, reuniting religious leaders of all faith communities, to prevent and transform conflicts through preventive diplomacy, mediation, dialogue, and conflict transformation.

The Congolese Bishops’ Conference had been contacted by counterparts from all over Africa, and particularly the Great Lakes region, to share their experiences. Today, together with their counterparts from the Protestant church and the Muslim community in the DRC, as well as from all other countries of the Great Lakes region [1], they stand ready to take on the challenge to lead the way to sustainable peace in the African Great Lakes region. They are persuaded that it is primarily up to them to play a decisive role in building their own peace, rather than waiting for the “international community” to come to the aid of their people.

CENCO and CatImpact: a tested and successful partnership

CENCO has been supported in the conception and execution of this project by CatImpact Sàrl with its network of senior experts in mediation, peacebuilding, and strategy development. CatImpact was instrumental in the establishment of the Platform and its strategy, and the IPDP-GL decided to continue the partnership to maintain the same dynamic, at least until the end of the consolidation phase. The primary objective of CatImpact is to act as a catalyst for its partners to have greater impact in their work. CatImpact is thus be available to support CENCO and its partners on their request. Sole ownership of the Platform remains, however, with the members of the Platform, i.e. CENCO and its partners from Congo-Brazzaville, Central African Republic, Angola, Rwanda, Burundi, and South Sudan.